If you’re doing a lot of keto/low-carb baking, you’re probably using a lot of almond flour, right? Here are over 40 allergy-friendly, keto baked goods made without almond flour, including cookies, cakes, brownies, muffins, breads, and more!

Interested in learning more about keto baking and sweeteners?
Download our FREE Guide To Alternative Sweeteners to get your questions answered!

I remember the first time I baked with almond flour.

Many moons ago — when being grain-free and paleo was all the rage.

I baked some brownies — the source of the recipe fails me just now — and I thought I had died and gone to heaven.

How could these brownies — made out of NUTS — be so brownie-like? It was magical.

I was sold. Almond flour has been part of my pantry ever since. Heck, I even wrote a low-carb dessert eBook with almond flour as the primary ingredient in most of the recipes!

Well, I’ve learned a little bit since then…

And while I don’t plan to avoid almond flour for good, I am reducing my use of it. A lot.

Here’s why I think we need to limit our use and consumption of almond flour.

To recap that post, here are my 7 reasons for limiting the use of almond flour:

Over a gallon of water is required to grow just one almond. California grows 85% of the world’s almonds — and it’s been in the worst drought in its recent history.

#2 — Almonds are high in phytic acid.

This antin-nutrient binds to minerals, preventing their absorption by our bodies. It can also cause tooth decay and digestive issues, leading to intestinal permeability.

#3 — A diet high in nuts, nut flours, nut butters, and nut milks can cause tummy troubles, like constipation.

#4 — Our perception of how many nuts we’re actually eating is skewed.

When we eat a muffin or slice of cake made with almond flour, we’re eating way more than a small handful of almonds. So, eating a lot of baked goods with almond flour causes us to eat a lot more than we realize. Which can lead too…

The recommended amount of nuts to eat per day is a small handful. Any more than that, and we throw off the balance of Omega 3 to Omega 6 fatty acids, consuming more Omega 6 and PUFAs, which are inflammatory to the body.

All those grain-free almond flour muffins, brownies, pancakes, and waffles are costing you a LOT of dough!

With food allergies on the rise, many schools are banning nuts. So, those almond flour cookies you want to put in your kids’ lunchboxes are out. Or, you can’t show up to class parties with almond flour cupcakes.

I’ve rounded up over 40 Keto Baked Goods Made WITHOUT Almond Flour — just in case you think I make some good points and want to use less almond flour in your home, too.

Grain-free baked goods are still treats and should be eaten in moderation and not in place of WHOLE FOODS like pastured meats, veggies, fruits, and healthy fats.

If you eat keto or low-carb, you know that a large majority of baked goods are made with almond flour. This is because it’s low in carbs and suited to making breads, brownies, cookies, muffins, and more. So, you can be keto and still enjoy your favorite baked goods.

However, the more keto baking I do, the more I’m moving away from almond flour — for the reasons listed above.

That’s not to say that you’ll never see an almond flour recipe from me again… you probably will. 😉

But, I do think almond flour is over-used as a grain-free flour and tends to skew people’s perceptions about the amount of nuts and grain-free treats they’re eating.

And yes, even savory, grain-free bread is still a treat. 🙂

Therefore, I’ve rounded up the best keto baked goods made without almond flour that I could find. Believe me, this wasn’t easy!

And finally, there are a few savory almond flour-free breads and biscuits!

BONUS! 5 Keto Frostings for Those Cakes! 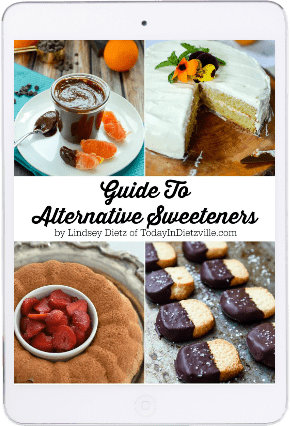 Thank you for this post!! I’ve been doing keto for a few months and love it but sometimes want to bake. I can’t use almond flour because my body just says no! And it’s so tough to find recipes without it! Also, my scale seems to be stuck so I don’t want to be consuming a bunch of nuts anyway. It’s also way expensive and I can’t even find blanched almond flour in a reasonable price range. Especially if the recipe calls for 2 cups or more! I’m excited to explore these lists that you have compiled. Thank you!

So thankful that I finally came across recipes without almond flour, I am allergic to almonds and I have to invested a lot of time searching for recipes that don’t require almond flour and usually come across a few! Very frustrating. Thanks a bunch!

You’re exactly the person I put this round-up together for!

I use 3 TBls of almond flour, to make bread for a sandwich, can I use coconut flour for this?

Finally baking recipes without almond flour! Almost every keto recipe requires almond flour, which makes me annoyed, because I try to keep my keto diet frugal in terms of extras (like baking), to spend more money for the good quality products I eat every single day.
I will definitely try some of your recipes 🙂

Wonderful! Yes, it’s annoying that so many keto desserts are made with almond flour. Most of the keto desserts here on my blog are coconut flour-based, so I hope you’ll check them out!

This is the post i always wanted but never knew why!

Yep, it’s because I removed the Death by Chocolate Cookies, so I re-directed the post to another link. Thanks!

thanks for sharing my pancake puffs! I pinned so I can try all this yumminess later!